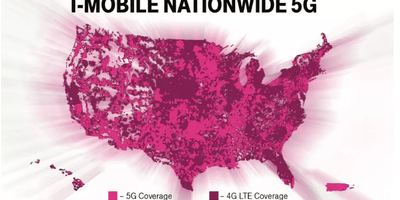 T-Mobile has flipped the switch on its 5G network, setting it live over areas of the US that it says covers 200 million people. While the network is supposedly live today, no one is going to be using it until later this week: the first two phones to support it go on sale this Friday.

The “nationwide” 5G deployment relies on a slower form of 5G, using T-Mobile’s 600MHz spectrum. This “low-band” 5G essentially takes airwaves like the ones used for LTE and bundles them together with some new technology to deliver faster speeds.

T-Mobile doesn’t offer specifics on what kind of speeds you’ll see on the new network, and the actual improvements will vary a lot by location. “In some places, 600 MHz 5G will be a lot faster than LTE. In others, customers won’t see as much difference,”

Because T-Mobile is relying on LTE-like spectrum — which travels relatively far — the carrier is able to deploy it over a wide swath of the country. It’s the first major wireless carrier to claim nationwide 5G coverage.

On Friday, T-Mobile will begin selling the OnePlus 7T Pro 5G McLaren Edition for $899.99 and the Galaxy Note 10 Plus 5G for $1299.99. Both are capable of connecting to its 600MHz 5G network, and all T-Mobile and Metro plans include 5G access. The phones do not support mmWave.