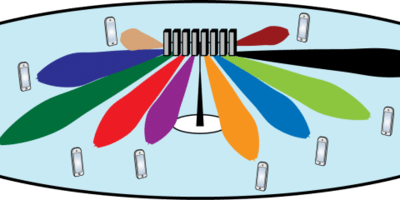 Massive MIMO is a multi-user MIMO (multiple-input multiple output) technology that can provide uniformly good service to wireless terminals in high-mobility environments. The key concept is to equip base stations with arrays of many antennas, which are used to serve many terminals simultaneously, in the same time-frequency resource.

The word “massive” refer to the number of antennas and not the physical size. The antenna arrays have attractive form factors: in the 2 GHz band, a half-wavelength-spaced rectangular array with 200 dual-polarized elements is about 1.5 x 0.75 meters large. Massive MIMO operates in TDD mode and the downlink beamforming exploits the uplink-downlink reciprocity of radio propagation.

Specifically, the base station array uses channel estimates obtained from uplink pilots transmitted by the terminals to learn the channel in both directions. This makes Massive MIMO entirely scalable with respect to the number of base station antennas. Base stations in Massive MIMO operate autonomously, with no sharing of payload data or channel state information with other cells.

Below the result from the Sprint LTE TDD network, where massive Mimo 64T64R and 8T8R are both deployed:

“We observed up to a 3.4x increase in downlink sector throughput and up to an 8.9x increase in the uplink sector throughput versus 8T8R (obviously the gain is substantially higher relative to 2T2R). Results varied based on the test conditions that we identified. Link budget tests revealed close to a triple-digit improvement in uplink data speeds.  Preliminary results for the downlink also showed strong gains. Future improvements in 64T64R are forthcoming based on likely vendor product roadmaps.”

Six key differences between conventional MU-MIMO and Massive MIMO are provided below.