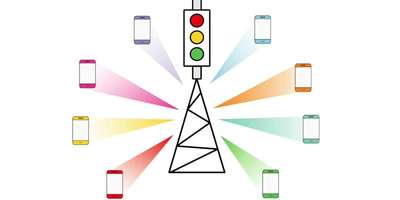 I don’t think trasmitting signal in Beam in high frequency deployment would be the matter of choice. It is a kind of ‘MUST’ implementation. In case of low / mid frequency region without using massive antenna array, a single transmission would cover a lot of UEs simultaneously. However, when the radiation become beam-shaped it is very difficult to cover multiple UEs in single transmission unless those multiple UEs are located in very close proximity. To handle this problem, we need a very sophisticated idea of managing/controlling the beam to cover the multiple devices scattered in all directions and the management/control mechanism should be different depending on the situtations. We will see more details in beamforming management operation part.

The beamforming technique focuses the RF energy into a narrow direction to allow the RF beam to propagate farther in that direction. Using this technique, non-line of sight (NLOS) RF communication in the mmWave spectrum may rely on reflection and/or diffraction of the beams to reach the UE.
If the direction becomes blocked, either because of UE movement or changes in the environment , the beam may not be able to reach the UE. Thus, in order to ensure that the UE has continuous, seamless coverage, multiple beams in as many different directions as possible may be available.

It refers to evaluation of the quality of the received signal at the gNB or at the UE. Different metrics could be used such as RSRP, RSRQ and SINR for this purpose.

the selection of the optimal beam (or set of beams) to set up a directional (and fully beamformed) communication.

then, The UE selects Beam Index  as it’s the “Best” beam from the UE point of view

Ue after selecting the best beam from gNB, UE inform the selection by using a specific PRACH resource mapped to each DL Beam