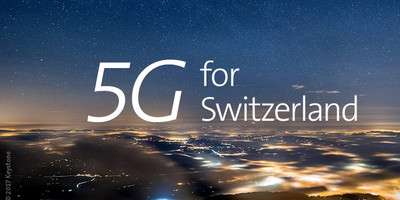 it becomes Europe’s first provider of 5G services in the 3.5 GHz band that work on actual 5G smartphones.

Switzerland completed its 5G-enabling spectrum auction in February, awarding airwaves in the 700 MHz, 1400 MHz, and 3.5 GHz bands to Swisscom and rivals Sunrise and Salt.

Swisscom had already announced the launch of the network, and introduced smartphone and mobile router ecosystem partners, at an event in Zurich on 10 April.

The commercial 5G network, and related 5G services, are now available in 54 cities and communities in Switzerland, including the major population areas Zurich, Bern, Geneva, Basel, Lausanne and Lucerne.

Swisscom previously announced its aim to have its 5G network operational all over Switzerland by the end of 2019 – with close to 90 percent nationwide population coverage. This will be achieved by using Ericsson Spectrum Sharing software that dynamically shares spectrum between LTE and 5G carriers based on traffic demand. This will enable fast nationwide 5G coverage with 5G-ready LTE radios.

Ericsson and Swisscom have a long partnership working toward commercial 5G services. In November 2017, Swisscom selected Ericsson as its strategic partner for Gigabit LTE and 5G. Since then, the two companies accomplished Europe’s first end-to-end, multivendor 5G Non-Standalone (NSA) data call on 3.5 GHz band in September 2018, and Swisscom selected Ericsson for a number of its products including end-to-end 5G transport, Ericsson Expert Analytics, and most recently, Ericsson Security Manager.