China have launched 5G on June 2019, and on august of the same year the first domestic 5G mobile phone was launched.

After 1 year, in China what is the situation of mobile phone ?

One thing we know for sure is that domestic 5G product design has gone through a “heavy at first, then light” process with design of phones always driven by better customer experience.

In 2020, the development of domestic 5G infrastructure and network coverage is still in the early stage. As of the end of June, only about 500,000 5G base stations have been built in China; and clearly total shipment of 5G devices were exploding.

in the past year, the total shipments of 5G mobile phones have exceeded 67 million units. Since the beginning of May this year, the proportion in a single month has exceeded 50%. 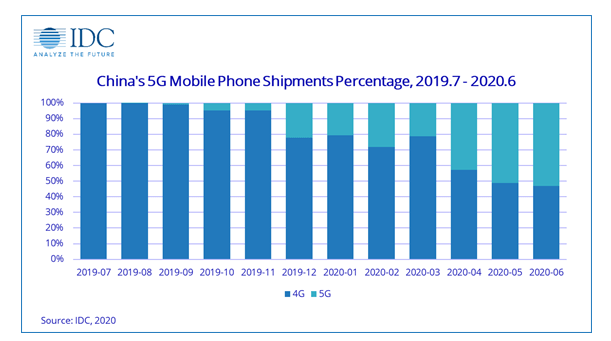 The 5G adoption is dependant on the availability of affordable devices. Usually mass market devices need to be in the range of 100-200usd to achieve >50% subscriber penetration.

During 4G era, the lack of cheaper smartphones created a longer than expected adoption cycle. It took around 7 years for 4G smartphones to achieve the 100usd price mark, so china  has taken a very different approach this time to ensure their massive infrastructure investment is used by their people.

Since the end of 2019, 5G smartphones, which are under 190g and have a more user-friendly holding experience, have gradually entered the market and really saw explosive growth in Q2 2020. By  June 2020, almost 50% of 5G smartphones in the country are thin and light phones weighting less than 190g. 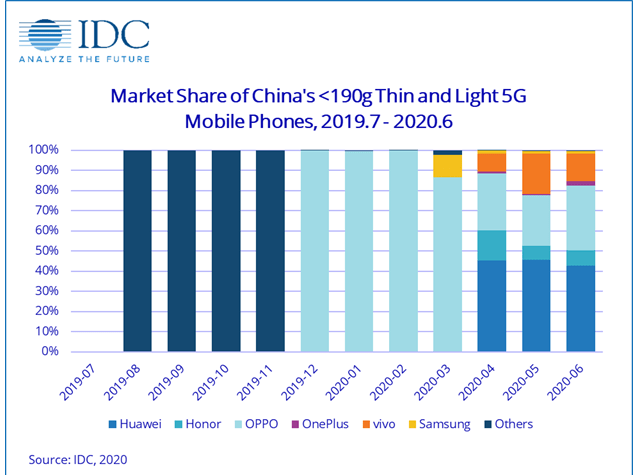 Before November 2019, only China Mobile and ZTE had launched thin and light 5G mobile phones lighter than 190g. Among the leading manufacturers, OPPO first launched a light and thin 5G model by Q4 2019 and continued to invest in those type of phones. Starting from April 2020, Huawei has gained more than 40% market share in the thin and light smartphone market in the Q2 2020 with their known models nova 7 series and P40 model occupying a dominant position.

From May 3 to 2022 Samsung has signed into a multi-year agreement to supply the equipment to Dish to build its forthcoming 5G network...
Read more
5G news

Bell announced the launch of its first edge computing multi-access (MEC) service that is powered by AWS Wavelength Canada. Based on the agreement Bell...
Read more
5G news

Rogers Communications confirmed the launch of the first commercial 5G standalone network (SA) in Canada. After completing certification of 5G standalone devices and the...
Read more