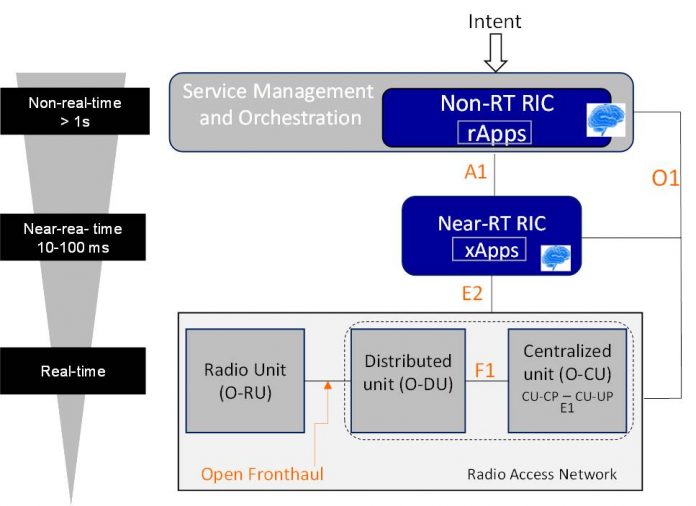 The RAN intelligent Controller (RIC) is cloud-native and forms a major component of an open , virtualized network of RAN. It is the foundation for enabling the programmability of networks, as well as intelligence and disaggregation on the modern network.

The RIC architecture is comprised of an Distributed Unit (DU) Software function as well as a multi-RAT protocol CU stack, a near-real time RIC and orchestration/NMS component with non-real Time RIC.

The RIC  makes smart decisions regarding the RAN in order to maximize performance. by using artificial intelligence (AI), machine-learning (ML), energy optimizationand Network slicing. It is the primary responsible  for all RAN operations and optimization processes such as radio connection management, mobility management, the QoS management, interference management and radio resource management.

What are the types of RAN Intelligent Controller (RIC)

Non-RT RIC: A logical function internal to the Service Management and Orchestration (SMO). It receives some intents from e.g., the Business Support System (BSS), and translates them into policies for the Near-RT RIC to guide its operation. The Non-RT RIC can host non-real-time control, optimization and AI/ML models running within applications denoted as rApps.

Near-RT RIC: A logical function that controls and optimizes E2 nodes’ functions and resources. It can host control, optimization and AI/ML models within applications denoted as xApps that operate at a time scale varying from 10 milliseconds to 1 second. xApps are used to enforce policies instantiated by the Non-RT RIC.